Chief Custodian of The Temple of Tooth

British rulers, who colonized the old Ceylon in 1815, handed over the main lay guardianship of the sacred tooth relic of Lord Buddha and the Temple of Tooth together with the castle premises to the Chief Custodian or Diyawadana Nilame. Every Diyawadana Nilame has respectably safe guarded the sacred tooth ofLord Buddha while performing the required pooja and other traditional rituals from eons. In 2005; a time of dire importance to have a well- suited and committed Diyawadana Nilame, Mr. Pradeep Nianga Dela participated in the election with the required and befitted background as he had gained enough experience which he received from being the Basnayake Nilame in the historical SamanDewalaya in 1999 and Basnayake Nilame in the historical RuhunuKatharagamaDewalaya in 2001 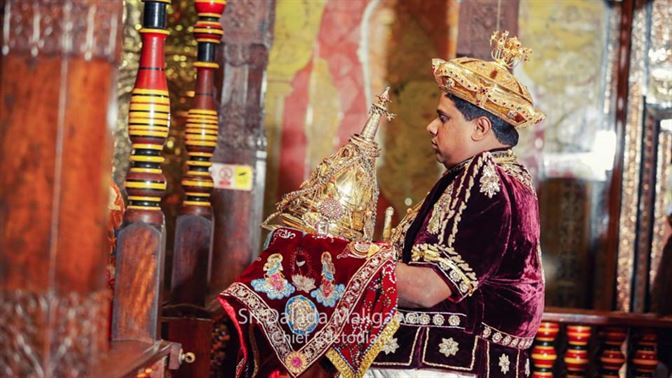 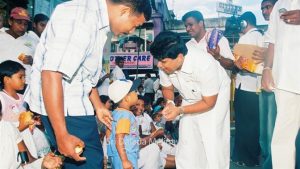 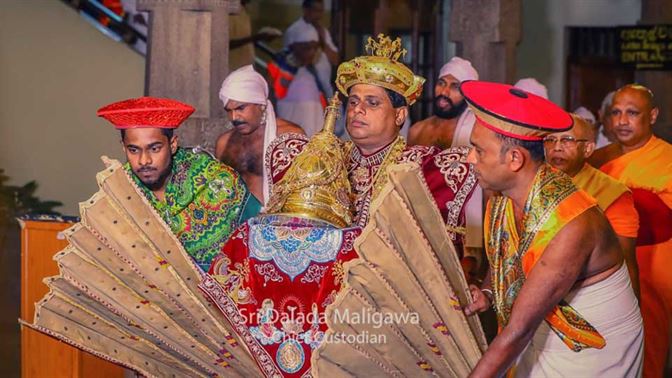 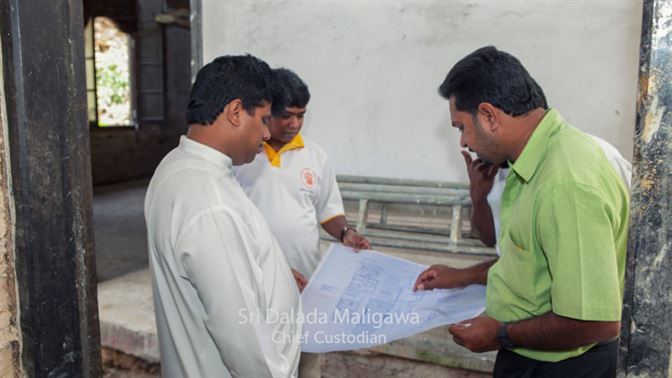 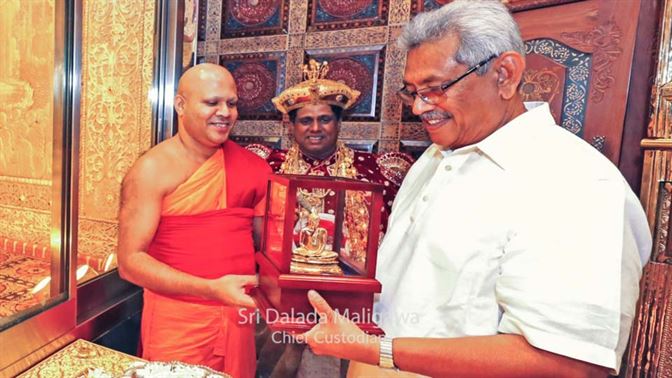 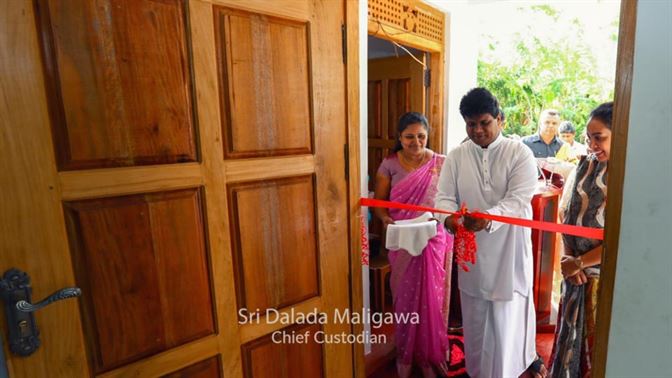 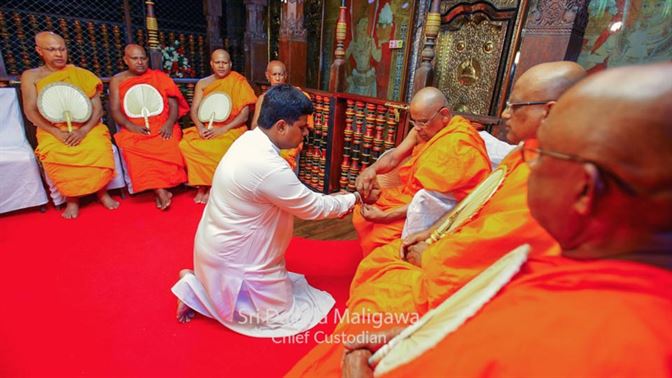 It is very significant that he had been the Basnayake Nilame in two main Dewalaya in Sri Lanka simultaneously. As mentioned above, the experience he had received is immense from being the Basnayake Nilame of RuhunuKatharagamaDewalaya and Sabaragamuwa SamanDewalaya which conduct the annual perahera that are being second only to the Esala Perahera in Kandy

With this experience, Mr. Pradeep Nilanga Dela was elected as the 19th Diyawadana Nilame of the sacred temple of tooth on 31st July 2005. He was fortunate enough to be elected as the 19th Diyawadana Nilame of the Temple of Tooth consecutively for the second time in 2015 as well. The infinite service done by Mr. Pradeep Nilanga Dela as the Diyawadana Nilame according to his manifesto while understanding the responsibility as the Chief Custodian is well- respected and esteemed by the general public.As the son of Mr. and Mrs. Dixon Sarathchandra, Wanigasekara Wanasingha Mudiyanse Ralahamilage Pradeep Nilanga Dela was born on 28th October 1973 at GodellaWalawwa which was situated in a beautiful village called “Dela” in Rathnapura District. Mr. Pradeep Nilanga’s mother served as a teacher for a long period;after her retirement she was enrobed. Currently, she lives in Ashoka Meditation Monastery in Pelawatta.He started schooling in 1978 in Thurston College, Colombo and his secondary education was obtained in Nalanda College, Colombo in 1980. He was awarded as the Best Nalandian in 1992 and was a senior prefect in Nalanda College. In addition, he has been a student activist by leading many school associations such as Commerce Society, Literature Association and Buddhist Association.Being interested in traditional dancing styles such as Kandyan, Low Country (Pahatharata) and Sabaragamuwa, he was able to gift many victories to his school from a number of dancing competitions including all-island competitions.

He was selected to Sabaragamuwa University after Advanced Level examination and he was awarded the “Nalanda Keerthi Sri” title in 2005 for the recognition and respect he has earned for his school. He has earned numerous titles for the invaluable service he has done; to name a few, Sri Saddarma Dhaja Mahamanya Lanka Puthra, BuddaShasana Bandu, Ranamayura Gawrawa Pranamaya, Sabaragamu Sarasawi Abhiramya (2006), honorary doctorate from Thai Maha Chulalankara National University.The service he has done as the Diyawadana Nilame of the Temple of Tooth Relic is very honorable.It is evident that the Temple of Tooth Relic is developed in a way that to besuited to the present day, but the development is made keeping its historical value and sacredness; and thus it is worshipped and respected by both local and foreign devotees. Further, he has sufficed to improve Kandy Esala Perahera to the current standard by preserving its historical Kandyan tradition.Moreover, he is engaging in developing temples in rural areas and distributing monetary and material funds to the poverty-stricken public in Sri Lanka. The massive social project “Ape Sathkaraya” conducted by the Temple of Tooth Relic was also a concept ofDr. Pradeep Nilanga Dela, the honarabe Diyawadana Nilame. 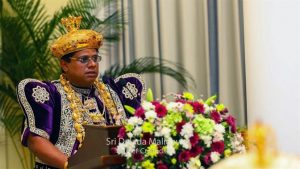 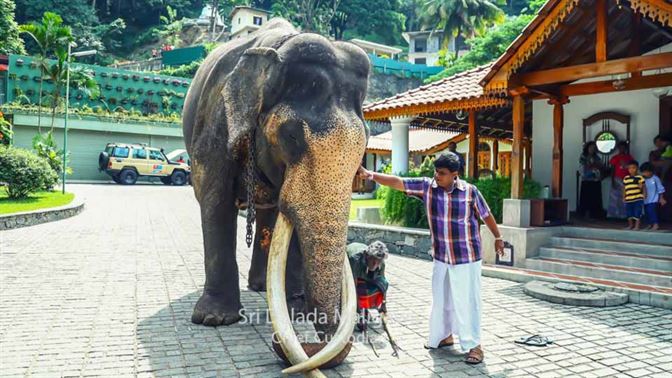 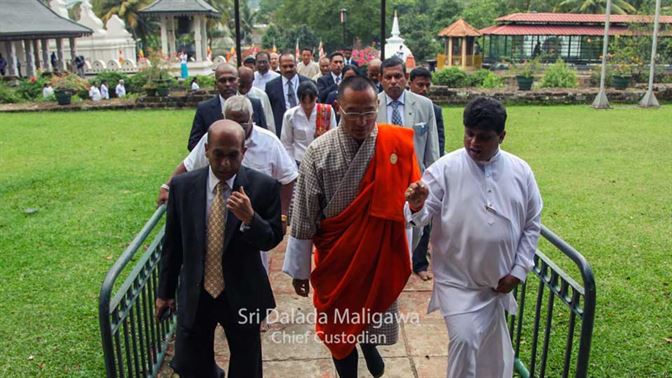 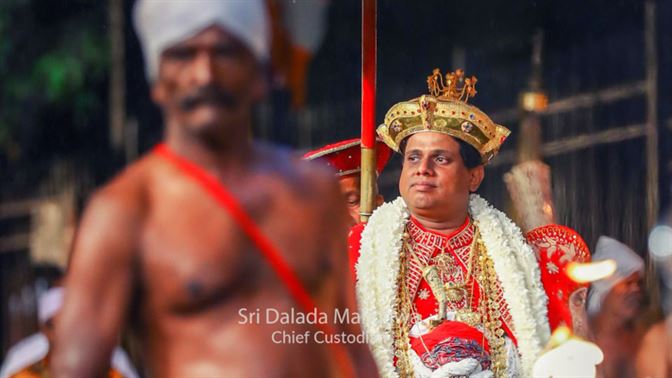