The Malwatta and Asgiriya monastic establishments have been closely associated with the sacred Tooth Relic to the extent that the Mahanayakes of the two monasteries, together with the DiyawadanaNilame, play the role of the three custodians of the sacred Tooth Relic. All religious rituals throughout the year, expositions of the sacred Tooth Relic and other matters relating to the sacred Tooth Relic are executed under the jurisdiction and the blessings of the two Mahanayakes. The two Mahanayakes today play the role of guardians of the State of Sri Lanka in that the Heads of States seek their blessings in the practice of State policies. The two monastic establishments seem to have been following the age-old monkish avocations – gamavasi (City dwellers) and vanavasi (Forest dwellers). Of these, MalvatuMaha Vihara comes closer to gamavasi sect with more closer association with the ruling houses, while AsgiriMaha Vihara traces its origin from the vanavasi sect of the well knownDimbulagala forest monastery of Polonnaruva. Over the years, the two monasteries have grown in stature and significance and both play equal roles in the reiligions activities of the Sri Dalada Maligawa.

The Maha Viharas have their own executive councils (Karaka Sabha) consisting of senior monks. The Mahanayakethera, the Aunnaka Thera (Deputy) and the Lekhakadhikari (Secretary) of the respective Council play singular roles in the administration of the monasteries as a whole. Each of the Chapter possesses a string of smaller monasteries spread around the suburbs of the city of Kandy and outside. These temples play active roles in the religious and social activities of the Chapter concerned. Both Chapters belong to the major sect known as the Siam Nikaya as against the Amarapura and the Ramanna sects established in the maritime region of the country. 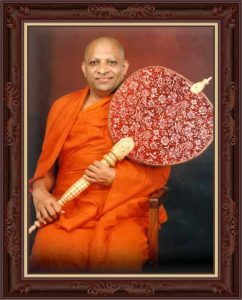 In receiving ordination on 10th June 1957 the Thero obtained higher ordination at the ceremonial hall of Malwatta Chapter on 10th June 1964 with the name “Wahalanaga”. In getting in charge of services at the temple of the sacred tooth relic such as hereditary offering of rituals etc. the MahaThero became a full pledged Thero with a good knowledge of traditional services and gradually became a member of the committee of Karaka Sangah Saba at Malwatta chapter and then getting elevated to the Summit of excellence the MahaThero was appointed Most reverend MahanayakeThero of Malwatta chapter on 20th June 2004 with a majority vote at the “Sanga sabaUposhathagaraya”. The Most reverend and highly respected MahaThero of Malwatta chapter maintains and acts in the position with all the accepted norms as a guide to other senior Bikkus. The MahaThero acts and sets examples in the behavioral patterns for other Theros not only in his own chapter but also in all other Nikayas as well. As the Supreme MahaThero of Malwatta Chapter. 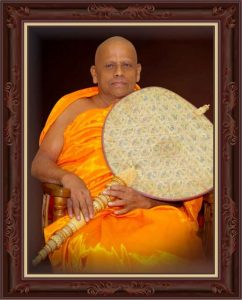 Warakagoda Sri GnanarathanaThero is the present MahanayakaThero of the Asgiriya chapter of Siam Nikaya. He was appointed as the 22nd Mahanayke Thera of Asgiriya Chapter on 7th April 2016, by the Karaka Sangha Sabha of Asgiriya chapter. The post of Mahanayake of the Asgiriya chapter fell vacant following the demise of the most venerable Udugama Sri Buddharakkitha Maha Nayake Thera. Eighteen members of the Karaka Sangha Sabha of the Asgiri Viharaya voted unanimously for the appointment of the 22nd Mahanayake Thera. Ven. Gnanarathana Thera who was also the Chief Incumbent of the Badulla Muthiyangana Raja Maha Vihara and he was the Anunayake Thero of the Asgiriya Chapter. born on 18 March, 1942, to the family of R.N.A.V.M. Mudiyanse and H.A.D.R. Pinchiamma. He was ordained in 1955