‘DiyawadanaNilame’ has the custody of the key of the first casket out of the seven golden caskets where the Sacred Tooth Relic is enshrined, as he is the lay custodian of the Sacred Tooth Relic. This position is recorded in the ‘Dathuwansa’, the chronicle of tooth relic, as ‘Dhathurakkadikari’. Diyawada Nilame also bears the responsibility of organizing daily rituals and annual festivals. Also he holds the responsibility of assets and properties of Maligawa and the regulation of duties of others. Officials in the service of sacred tooth relic are also entrusted to him. He is also duty bound to welcome foreign diplomats and other local and foreign delegations.
The official costume of ‘Diyawadana Nilame’ is the upcountry ceremonial dress (The Mul Anduma – Traditional Sinhala Costume Hailing from the days of the Royal Kandyan Kingdom). The dress is tailored using a total of 48 yards, 12 Yards of material for each item called Thuppottiya, Pachchawadama, Somaniya and Kawaniya. The dress consists of 14 parts. In keeping with tradition, the ‘DiyawadanaNilame’ wears a dress of white for Kumbal Perahara, while for Randoli Perahara either golden or some other suitable bright color is used. It’s a specialty that the dress is woven with golden thread. 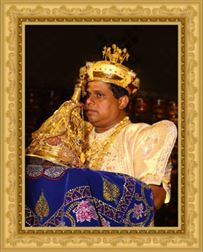 British rulers, who colonized the old Ceylon in 1815, handed over the main lay guardianship of the sacred tooth relic of Lord Buddha and the Temple of Tooth together with the castle premises to the Chief Custodian or Diyawadana Nilame. Every Diyawadana Nilame has respectably safeguarded the sacred tooth of Lord Buddha while performing the required pooja and other traditional rituals for eons.
In 2005; a time of dire importance to have a well-suited and committed Diyawadana Nilame, Mr. Pradeep Nianga Dela participated in the election with the required and befitted background as he had gained enough experience that he received from being the Basnayake Nilame in the historical SamanDewalaya in 1999 and Basnayake Nilame in the historical RuhunuKatharagamaDewalaya in 2001.

It is very significant that he had been the Basnayake Nilame in two main Dewalaya in Sri Lanka simultaneously. As mentioned above, the experience he had received is immense from being the Basnayake Nilame of Ruhunu Maha Katharagama Dewalaya and Sabaragamuwa SamanDewalaya which conducts the annual Perahera that is second only to the Esala Perahera in Kandy.